Italian Travel and Food tours in Genova, Liguria and Parma

Genova on the Italian Riviera

Genova or Genoa is still Italy’s principal seaport serving regattas, commercial and cruise destinations. The city makes a good excursion base or starting point for a range of driving, sea-borne, food tours, walking and cycling trips exploring the famous tourist villages and hillscapes along the World Heritage site of the Italian Riviera. A popular destination for tourists due to the area’s mild climate, the charm of its old fishing ports and the beauty of its landscapes is enriched by it’s particularly rustic food and wine traditions. Many villages and towns in the area, such as Portofino, Bordighera, Lerici, and the Cinque Terre are known the world over.

Local food n walk tour host Nick Garrett (foodnwalktours.com) has been living and working in the area for ten years thinks the region has a lot more to offer.

”Without a doubt the scenic beauty is something to last a lifetime but it just starts there, for me it’s the amazing foods, landscape and walks that fascinate the new adventure visitor… and the food is a unique blend of rich Parma ingredients and delicious Ligurian twists”.

Check out this great video of the region, so you can see how beautiful the area is and all the fantastic things there are to do when you come for a visit!

During the Roman Empire era, Genoa was a major shipping  port for goods made locally. After the downfall of the Roman Empire, Genoa became an independent city. In the 11th century, a short- lived alliance between Genoa and Pisa took control over Sicily and Corsica. Later, the two cities waged war against each other for the control of the two islands and Genoa defeated Pisa. After this, the merchants governing Genoa had power comparable only to the Pope and the kings of the European states. During the Crusades, Genoa’s wealth and strength continued to grow and expand and, as a result, they were able to acquire more possessions and trading privileges.


Salt production was a necessity of life and a vital commodity for food storage in medieval society. It also served as money at various times and places, and it has been the cause of bitter warfare. Genoa imported salt from Sardinia and Provence and delivered it across the Alpine passes into Switzerland. The expansion of Genoa’s trade and land acquisitions caused concern in the region, especially from the Venetians. This long-standing conflict for dominance of the eastern Mediterranean Sea between the Republic of Genoa and the Republic of Venice led to war in 1256.

One of the results of these wars was that the Genovese fleet was destroyed by the Venetians and this lead to the weakening of Genoa. The wars ended in 1528 and Genoa became a ship building port and bank center. A second result of the  wars was that Venice gained control of a large portion of the commerce in the eastern Mediterranean. Genoa’s revenge came later when Christopher Columbus, a native of Genoa, destroyed the Mediterranean salt trade by bringing new supplies to Europe from the” New World.”

Though Genoa was dominated by nearby countries, like France, it kept its independence until 1797. At that time, Napolean Bonaparte organized the Republic of Liguria and unified it to France in 1805.  Ten years later, Genoa was united with the Kingdom of Sardinia and this country played a very important role in the unification of Italy, since the king of the Kingdom of Sardinia, Victor Emanuel II, became the king of Italy.  The port of Genoa was heavily damaged during WW II and, again, by heavy storms in 1954-55.  Soon after, the port was rebuilt and modernized. Although Genoa is a still a chief seaport, it is also a center for commercialization and industry.
What To Do In Genoa
For Music Lovers:
Take the  Culatello Verdi Tour
http://foodnwalktours.com/culatello-verdi-day-tour-profile-budget-beater-toursbalsamico-tours-budget-food-tours-parma-bologna-italia/

Some great places to see in Genoa are the Palace of the Doges, the medieval Church of San Donato, the Carlo Felice Opera House (dating back to the 19th century), the 16th century churches of St. Ambrose and the Annunciation, as well as, other Renaissance palaces and buildings. Walls and forts are abundant throughout the city and the narrow streets of the harbor area are intriguing.


One popular attraction is the lighthouse called Lanterna, which dates back to the 16th century. This lighthouse is an important “landmark” for Genoa. In 1992, Renzo Piano was credited for redesigning the Old Port. A modern aquarium and a tropical greenhouse are located there. Genoa has a university, which was founded in 1243, and a few museums.


Genoa’s maritime presence is still very strong, which can be sensed throughout the entire area. “The Regatta of the Ancient Sea Republics”, involves Genoa, Pisa, Venice and Amalfi in a yearly navigational competition. The regatta rotates among the four areas and occurs every fourth year in Genoa.

Every two years Genoa hosts the Pesto World Championship in the city’s historic Palazzo Ducale, where one hundred competitors from all over the world meet to make their pesto recipe in order to gain the title of Pesto World Champion. The participants are both professional cooks and amateurs who compete by preparing pesto sauces using only authentic ingredients and traditional recipes. The pesto sauces are then judged by tasters ranging from restaurant owners and expert cooks to food and wine journalists.
Sergio Muto is the 2012 winner of the Genoa Pesto World Championship. He’s 58 years old, born in Cosenza (Calabria, Italy) and living in Germany since 1976 where he manages a delicatessen.
The Food Of Genoa
The cuisine of Genoa is based on traditional Mediterranean cooking and very rich in flavors. The Ligurians use very simple ingredients, which by themselves may seem insignificant, but when combined together, they accentuate and bring out each ingredient’s individual qualities to produce superb flavor and  harmony. 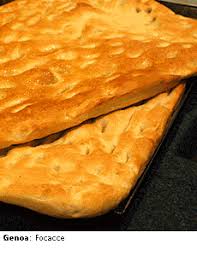 At the base of all recipes is Ligurian olive oil, delicately flavored and perfect for preparing sauces.

The most famous of these is pesto, a sauce made of basil, pine nuts, garlic, olive oil, and parmesan cheese.   Some other well-known sauces from this region are salsa verde, a green sauce made of parsley and pine nuts for grilled meat, and salsa di noci, a walnut sauce that goes perfectly over pasta and ravioli.

Different kinds of focaccia and torte are characteristically Genovese and these dishes can be eaten as main entrees or appetizers. Among the Primi Piatti (first courses), there are different kinds of pasta, for example, trenette and taglierini  flavored with basil pesto or pansotti, a huge ravioli stuffed with vegetables and herbs topped with walnut sauce.

Among the various meat dishes are veal roulades filled with bread and herbs stuffing, lamb stew with carciofi (artichokes) and a stuffed pocket of pancetta, sliced and served cold. Fish occupies an honored place on the menus of Genovese restaurants.

Among the desserts, one of the most distinctive is Pandolce, a treat found on every table at Christmastime. Genoa is also famous for its pastries: Canestrelli, Amaretti, Baci di Dama (little walnut pastries), and Gobeletti, little short breads filled with quince jam.

For Aspiring Chefs:
You can learn to make some of these fabulous Italian dishes by attending cooking classes with the Food n Walk Tours in Parma, Italy.
Here is the contact: http://gustoitalia.wordpress.com/our-3-kings-tours/cooking-lessons-click-here/ 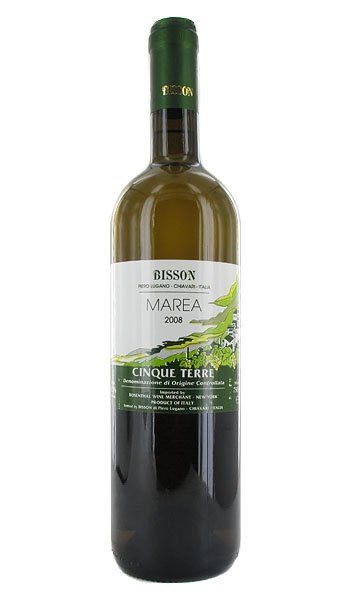 The proximity to two major Italian wine producing regions influences some of the wine production of the Liguria region. In the Riviera di Ponente area or “western Liguria”, the wines are made mostly of a single type of grape, while in eastern Liguria, in the areas of Lunigiana and Cinqueterre, the wines are mostly produced by blending several grape types. While the majority of wines produced in Piedmont and Tuscany are full-bodied red, Liguria specializes and excels in white wines that complement the local cuisine.
The Marea Cinque Terre is made from a blend of several traditional local grape varieties: Bosco, Vermentino, and Albarola. The result is a full-bodied, earthy wine of immense character with a deeper golden tint. This wine is an excellent choice to accompany the Linguine with Basil Pesto recipe featured below.
For Curious Minds:
Interested in learning about how Parmigiano Cheese or Balsamic Vinegar are made or the process for curing Italian dried meats, you can visit the factories where these products are made.  Here is the contact: http://foodnwalktours.com/parma-gold-food-tour-pallazo-food-tour-tour-profile/
For Aspiring Chefs:
You can learn to make some of these fabulous Italian dishes by attending cooking classes with the Food n Walk Tours in Parma, Italy. Here is the contact: http://gustoitalia.wordpress.com/our-3-kings-tours/cooking-lessons-click-here/
Make A Genoa Inspired Diner At Home 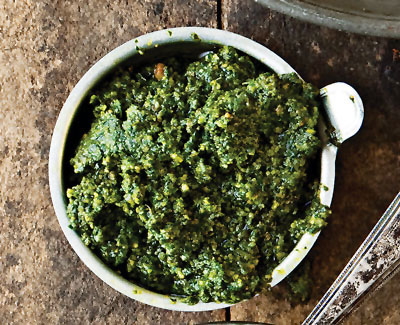 If you are a traditionalist, you can make this sauce in a mortar with a pestle.
Ingredients:
Directions:
In the work bowl of a food processor, pulse the the basil, garlic, pignoli and the salt together. Gradually pour in the olive oil with the motor running; the mixture will emulsify.
Transfer the pesto to a serving bowl and stir in the Parmigiano and Pecorino with a fork.
Pesto keeps in the refrigerator up to 1 week as long as it is topped with a thin layer of olive oil; it can also be frozen for up to 1 month if the Parmigiano and Pecorino have not been added. 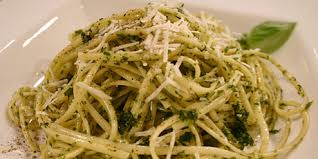 Ingredients:
Directions
Bring 3 quarts of water to a boil. Add salt and linguine into the boiling water. When the pasta is almost cooked to your liking scoop out 3/4 cusp of the pasta cooking liquid and add it to a pasta serving bowl. Drain the pasta in a colander, shaking it to remove excess water. Transfer the pasta to the bowl containing the pasta cooking liquid and toss. The cooking liquid will be absorbed by the pasta. Add the prepared pesto, mix well, and taste for seasonings. It should be well seasoned and the pasta should be quite moist. Serve immediately in hot deep plates, sprinkled with the shredded Parmesan cheese and freshly grated black pepper.

Resources in Planning a Trip to Genoa, Italy: